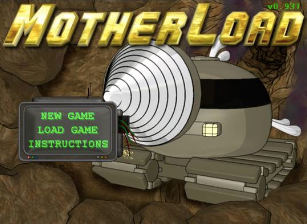 is a flash Digging Game developed by XGen Studios in 2004. The game takes place on Mars sometime in the future in a small martian mining outpost. The player controls a lone mining pod and is tasked to drill underneath the planet's surface in search of valuable ores. The gameplay is based on the mechanics of Dig Dug, except that there are no Pookas and Fygars to be seen under the surface—the entire challenge of the game comes solely from navigating the hazardous Martian sub terrain for ore and hauling it to the surface alive with the mining pod intact and without running out of fuel. As the miner reaches deeper under the Martian surface, various clues and transmissions begin to hint at something larger and more sinister going on, of which the answer seems to be hidden even deeper under the planet.

Despite its infamously random Gainax Ending of sorts, Motherload is easily one of XGen's most popular, if not their most popular game to date. Another game based on the original, Super Motherload

, was a launch title for the PS4. In addition to featuring HD graphics and local co-op multiplayer, it features new gameplay mechanics, multiple endings, and an optional "Hardcore" mode. Purchasers can also enjoy The Goldium Edition (Full version) of the original for free.