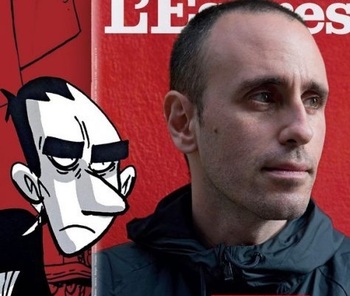 Michele and Zero. No, his eyebrows aren't THAT big.
Zerocalcare is the nickname of Italian comic book artist and blogger Michele Rech (Cortona, Italy, 1983), and also the name of his most popular character and the eponymous blog

where his stories are collected. As the description implies, Zerocalcare's stories are mostly autobiographical, with several embellishments when not outright mixed with fantastic elements.
Advertisement:

Rech started his career in high school by drawing a story about the G8 summit in Genoa, Italy

, and by drawing fanzines, posters and record jackets for several punk rock and hardcore punk local bands. While most of his body of work is political in nature and thus only known to specific circles, he became known to the mainstream when he opened his "comics blog" in late 2011, a genre virtually unheard of in Italy. Word of mouth quickly spread and his humorous musings on life became incredibly popular thanks to the power of social networks.

This sudden popularity led him to make a contract with an important Italian comic book publisher, who published eight books so far (two of which are collections of strips from the blog plus some new content), all meeting critical success in his home country. It also led to a few problems since he still needs to get used to this newfound fame.

In 2014 Rech himself made a post about The Movie of his first book La profezia dell'armadillo being made, with him as one of the scriptwriters. However, the years passed with no other news about it, so most people assumed it had been cancelled. Then in late 2017 it was apparently Saved from Development Hell, and it eventually came out in September 2018, but with no further comments by Rech who apparently disassociated himself from the project. It was probably for the best, since it was critically panned for being formulaic, badly acted and not even trying to adapt the comic medium to the big screen, with some embarrassing missteps (such as the Armadillo being portrayed by a guy in a creepy costume).

In December 2020 Netflix unveiled the teaser trailer for an animated series called Strappare lungo i bordi (English title: Tear Along the Dotted Line), created, written and directed by Rech himself, as a much more polished version of the animated experiments from his YouTube channel

. It features Zero, his friends Sarah and Secco, the Armadillo, a girl named Alice plus other characters. The series was released worldwide on November 17, 2021, in the form of a six-episode season; the Italian version has Rech voicing every character minus the Armadillo, who is voiced by popular Italian actor Valerio Mastandrea (who was also one of the movie's scriptwriters). Unlike the live-action movie, the series was praised as a very faithful and well-made adaptation of Zerocalcare's comics, and as a poignant example of adult animation that doesn't need to rely on violence and vulgar humor.

The author and his works provide examples of: