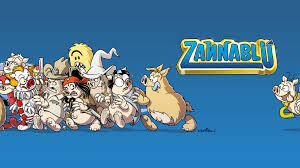 Zannablù is an Italian comic talking about a boar with blue tusks ("Zannablù" actually means "Blue tusk") and his crazy adventures. Really crazy.

While the series is mostly made of original stories, also some volumes are parodies of various movies or other things. In 2010, a subline called Zannini ("Li'l Tusks") is created, completely composed by parodies and in a smaller format than normal issues.

The comic series provides examples of: