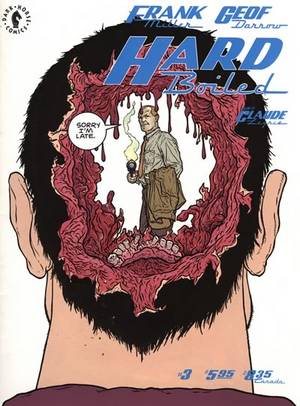 Geof Darrow has shot you.
Advertisement:

Geofrey "Geof" Darrow (born October 21, 1955) is an American comic artist well known for his seminal work, Hard Boiled, and to a lesser extent, The Big Guy and Rusty the Boy Robot, done with Frank Miller. Before all that though he worked as an animator on such cruddy shows as Richie Rich until one day he met the great French artist Moebius and the two collaborated on a series of prints called City of Fire. Known for a Signature Style that involves a mind-numbing degree of detail, on par with square root of a sheet of Where's Waldo?. In Every. Damned. Panel. And, indeed, if you go off the narrative pathway, you will find many hidden secrets. Also full helpings of Gorn all around.

After years of successful, critically acclaimed work, he simply vanished.

When asked where he had been all this time, Darrow had only one answer.

He had spent the time as lead Concept Artist for The Matrix.

Since the mid 2000s he has been writing and drawing his own series published by The Wachowskis called Shaolin Cowboy, issue by issue the comic seemed to increase in demented Crazy Is Cool weirdness, including an entire issue of the Cowboy carving up hordes of zombies with his trusty double-chainsaw-tipped spear for 24 pages straight. Sadly it has fallen into severe schedule slip.

Then Darrow revealed that he is directing an animated adaptation of Shaolin Cowboy with Madhouse!

Not to be confused with Geoff Barrow of Portishead, though a collaboration would rule.