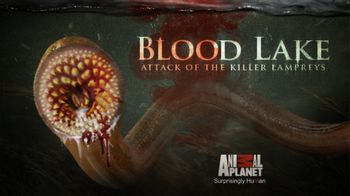 Blood Lake: Attack of the Killer Lampreys is a 2014 The Asylum Horror film, the first horror film on Animal Planet according to the press release. It is a film about killer lampreys that terrorize a small town in Michigan. Fortunately, Michael, official representative of Fish and Wildlife Service is there to save the day alongside his wife, Cate (played by Shannon Doherty), at least if he can convince the avaricious mayor, played by Christopher Lloyd, to play ball and close the beaches. Meanwhile, he has to deal with a teenage daughter, Nicole, and her new paramour, Alex, as well as his overly curious son, Kyle, who initially can't figure out why his father is so averse to the cute and cuddly lampreys.