Comic Book / The Big Guy and Rusty the Boy Robot 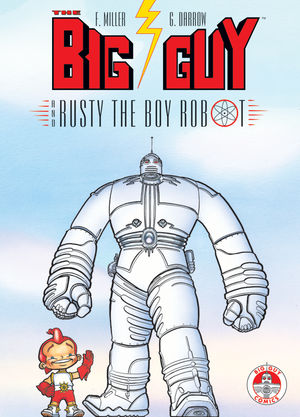 The Big Guy and Rusty the Boy Robot (1995) began as Frank Miller's and Geof Darrow's much more family friendly collaboration after the energetically demented Hard Boiled. The Comic was a big over the top tribute to Silver Age comics, Godzilla and Astro Boy. The story is about a giant, primordial monster unleashed upon Tokyo which the military is unable to defeat; subsequently the government is forced to send the newly developed and inexperienced Rusty the Boy Robot in to try and neutralize the threat. Unfortunately he is also overwhelmed by the monster and the government calls on the aid of their American allies who send in Big Guy, a bigass humanoid robot, with two fists and a whole lot of guns. The comic was adapted into a cartoon that ran from 1999 to 2000.

Tropes from the comic: