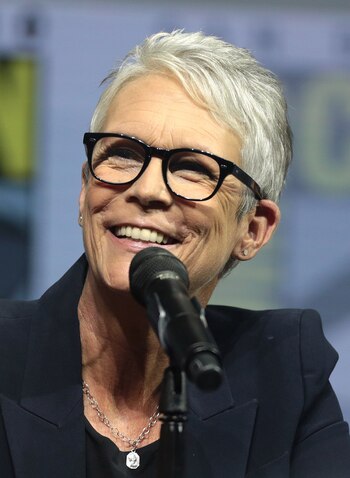 Watch out, Michael. She's here to kick your ass.
"I've been in show business all my life, but as an actress I have never been overly driven."
Advertisement:

The daughter of actors Tony Curtis and Janet Leigh, she first rose to prominence in 1978 as the Slasher Movie Final Girl in Halloween. She then appeared in a string of horror movies in the early '80s which further cemented her status as a scream queen.

Nowadays she is better known for her appearances in drama and comedy films, and appeared in a well-known series of commercials for Activia Yogurt. She's also a vocal advocate for women to embrace aging and to wear their wrinkles and gray hairs with pride.

She is married to the Anglo-American actor and filmmaker Christopher Guest, the 5th Baron Haden-Guest, so she is allowed to use the aristocratic title Lady Haden-Guest if she wants to.

She has also written various children's books illustrated by Laura Cornell, such as When I Was Little: A Four-Year Old's Memoir of Her Youth and I'm Gonna Like Me: Letting Off a Little Self-Esteem.