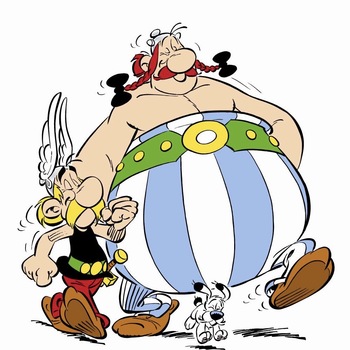 These Tropers are crazy!
"The year is 50 B.C. Gaul is entirely occupied by the Romans. Well, not entirely... One small village of indomitable Gauls still holds out against the invaders. And life is not easy for the Roman legionaries who garrison the fortified camps of Totorum, Aquarium, Laudanum and Compendium..."
Advertisement:

Asterix is the protagonist of a French comic book series, written by René Goscinny and drawn by Albert Uderzo, and now translated into over 100 languages and published around the world. The comics are also commonly referred to as Asterix and Obelix.

The Asterix comics take place in the year 50 BC. Julius Caesar has all but conquered Gaul (pre-medieval France plus some surrounding territory), except for a few pockets of resistance. One of those pockets of resistance is a small but plucky village in Armorica (modern Brittany), which — despite the vast numerical and military superiority of the Roman legions — has held back the invaders thanks to a Super Strength-granting magic potion brewed by their resident druid. The Undefeatable Little Village happens to be the home of our hero, a small but plucky Gaul named Asterix. Along with his friend Obelix, a huge loveable lug and monolith craftsman, Obelix's tiny dog Dogmatix and the other inhabitants of the village, Asterix gets into all manner of adventures that usually involve foiling the schemes of the Romans — and, occasionally, Caesar himself.

The stories are published as "albums" (the series, which began in 1959, predates the term "graphic novel") and typically alternate between two themes. In many of the books, Asterix, Obelix and Dogmatix, sometimes accompanying or accompanied by another character, go on an adventure somewhere — these are often have titles of the format Asterix in.... These plots allow for the most satire of different cultures and nationalities. In the second type of plot, a new plan by the Romans or an unexpected threat from outside brings danger and excitement to the village. These plots allow character development of the various villagers and their relationships.

Occasionally, a small (but very persistent) band of pirates (a parody of another comic series, Barbe-Rouge) makes a cameo appearance; their ship was scuttled by the potion-enhanced Gauls in an early story — since that initial appearance, they are usually seen either paddling frantically away from any Gauls they encounter, or coming across the Gaulish warriors during an incidental encounter and getting scuttled again (or even scuttling their ship themselves to minimize damage).

Part of the appeal of the series is probably the variety of humor, which includes slapstick fight scenes, plenty of wordplay, thinly-veiled social commentary, and Iron Age and Roman antiquity versions of just about every European (and beyond) stereotype you can imagine.

The series has some of the best translations of any comic-book ever; they're smart enough to keep the basic story while making new puns in the appropriate language.

After Goscinny's untimely passing in 1977 aged just 51, Uderzo took over the writing as well. After decades of solo work, he retired in 2013 and passed writing and art duties to Jean-Yves Ferri and Didier Conrad. Uderzo himself passed away at 92 in March 2020.

These tropes are crazy:

open/close all folders
Tropes A to C
Unseen Roman's voice: Either come in or go out, but for Jupiter's sake stop hitting us!
Tropes D to I
Tropes J to R
Tropes S to Z
"Sindoi Romanoi esont baitoi!"Gaulish "These Romans are crazy!" though "Romanoi" and "esont" are conjectural.