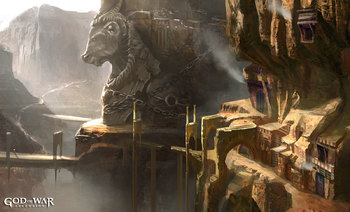 Sandal punk is a subgenre of the Punk Punk science fiction category. It focuses on the classical period or the ancient world before the Middle Ages, usually Ancient Rome, or Ancient Greece, or both, sometimes with hints of The Trojan War; or alternatively, on a Fantasy Counterpart Culture or Planet of Hats modeled on those settings. A closely related trope, known as Bible punk, combines Stone Punk and Sandal punk within an Egyptian or Middle Eastern setting.