Right Out of My Clothes 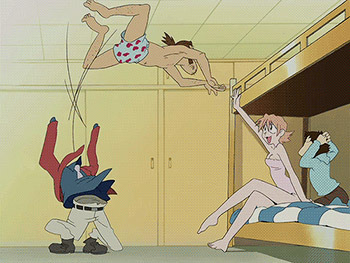 All except the Goofy Print Underwear.
Advertisement:

One moment a character is wandering through life, oblivious. In the next, some or all of their clothing is drifting to the ground like fallen leaves.

Unlike Empty Piles of Clothing, this method of clothing loss is usually Played for Laughs, and is seen most often in slapstick comedy or animated cartoons.

Gags that often set this trope into motion include an impact strong enough to literally smack the victim's clothes off (as in Getting the Boot, or the Plank Gag), or said outfit getting snagged whole by an obstacle along the way, like a tree or briar bush. If a nearby object or character is Off Like a Shot, its field of effect may carry the victim's outfit along even if the character is not.

This can also be self inflicted by the effects of a Pain-Powered Leap, Surprise Jump, Wild Takes, a Slippery Skid, or other equally acrobatic clumsiness. Off Like a Shot can leave a character's own clothes behind, if the character dashes off fast enough.

Sometimes the victim's clothes will float for a few seconds in their original position before falling to the ground, fall neatly around the character, or simply fly offscreen piecemeal to be absorbed into Hammerspace or the next scene over.

A variation where clothing a character wears doubles as a costume and is lost in this manner can lead to The Reveal, or a Dramatic Unmask.

May cause combinations of Comedic Underwear Exposure, Goofy Print Underwear, Partial Nudity, or Defeat by Modesty, and Fur Is Clothing if clothing lost includes — or is — a character's fur or feathers. Naked People Are Funny is a frequent, but not guaranteed, destination. If the clothes snap back to reappear on the victim without particular explanation, then Magic Pants has taken effect.