Recap / Asterix and the Big Fight 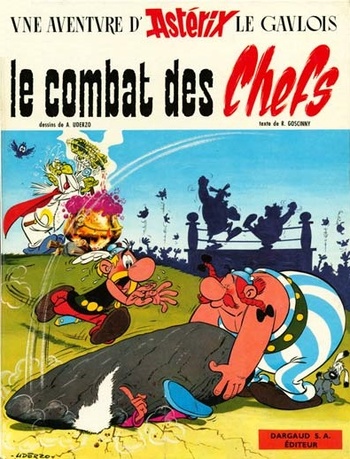 The seventh Asterix story opens with an explanation that at the time of the Roman occupation of Gaul, there were two kinds of Gauls: Gallo-Romans, who accepted the Pax Romana and tried to adapt to the ways of their invaders; and the indomitable kind, Gauls who liked food, drink, and a good punch-up. Gauls like the kind in Asterix's village.

Nebulus Nimbus, centurion of the fortified camp of Totorum, wonders how to deal with said village, and his right-hand man Felonius Caucus suggests they take advantage of a Gaulish tradition, the Big Fight; two chiefs duel, and the winner takes control of both villages. But who would fight Vitalstatistix on behalf of the Romans? The candidate is none other than Cassius Ceramix, chief of the nearby village of Linoleum, a Gaul who's not only gone Roman, but is forcing it on his villagers (insisting they shave off their moustaches, cut their hair short, wear togas, and drink water from an aqueduct instead of the river that flows through their village). While eager to please the Romans, Ceramix is not eager to fight Vitalstatistix, whose druid Getafix brews the potion of super-strength. So the Romans plot to remove the druid from the equation...

With supplies of magic potion running low, Getafix goes into the forest to collect herbs. Asterix has a nagging concern about the druid's safety and decides to follow him at a distance; Obelix tags along. Sure enough, Getafix is ambushed by a patrol from Totorum disguised as a hedge; Asterix and Obelix come to the rescue, but in his haste Obelix accidentally flattens Getafix with his menhir. Getafix recovers, but has lost his mind and memory, leaving him a giggling shell of his former self who now actually enjoys Cacofonix's "singing".

Meanwhile, the legionaries report back to Nimbus that Getafix has been taken out, and Nimbus relays the news to Ceramix, who goes to the village to challenge Vitalstatistix to the Big Fight... only to turn tail and run when he sees Getafix, alive and in very high spirits. Nimbus decides to send out another patrol to take out Getafix once and for all; meanwhile, Asterix and Obelix are trying to jog Getafix's memory so that he can start brewing magic potion again, but his first effort causes the cauldron to explode and launch into the air, landing on the leader of the patrol from Totorum, Infirmofpurpus. Once extricated from the cauldron, Infirmofpurpus is "volunteered" to spy on the Gauls, and is discovered by Asterix and Obelix when they go to collect ingredients for another attempt at brewing magic potion. Rather than thumping him, they forcibly recruit him as a guinea pig to test Getafix' potions, most of which turn him different colours, and the last of which causes him to float away like a balloon. This last one allows him to escape back to Totorum and report that Getafix may be alive, but he has lost his mind and is no longer a threat.

Asterix and Obelix visit a fellow druid and friend of Getafix's named Psychoanalytix, although their attempt to explain the situation leaves Obelix with a complex about his weight. When they return to the village, Obelix demonstrates how Getafix received a "little tap" with a menhir by flattening Psychoanalytix - wiping his mind and memory in the process. Now there are two druids brewing useless potions for each other. With no alternative, Vitalstatistix trains for his duel under Asterix. Ceramix, meanwhile, is more confident than ever, and plans to use his anticipated victory in the Big Fight as a springboard to challenge every chieftain in Gaul until he is ruler of the whole land; Felonius Caucus suggests to Nimbus that once Vitalstatistix is defeated, they can get rid of Ceramix in the Circus Maximus (Nimbus finds the suggestion so clever that he plans to get rid of Caucus the same way).

On the day of the match, the village goes out to watch, save the druids, both of whom are still Laughing Mad, and Obelix, who is racked with guilt. As the match begins, Vitalstatistix has Asterix go back to the village to collect Obelix, in case things go wrong and they need his strength. But back in the village, one of the silly potions cures Getafix (and, fortunately, he remains cured after Obelix gets the idea that if one "tap" with a menhir wiped his mind, another should restore it). Once the returning Asterix explains the situation, he brews a big batch of magic potion and hurries off to the fight with Asterix and Obelix, while Psychoanalytix - who didn't get to sample the curative potion - leaves in a huff.

When he hears that Getafix is cured and that they have potion to spare, Vitalstatistix lays out Ceramix in one punch and wins the fight. But the Romans aren't going to let the Gauls get away that easily, and attack, thinking that the magic potion is gone. Per tradition, the Gauls thump the legionaries, and during the fight Ceramix is flattened by Obelix's menhir. Vitalstatistix gives control of Ceramix's village back, with instructions not to kowtow to the Romans anymore.

And so, the story ends happily. The Gauls of Ceramix's village return to their Gaulish ways, and the now-amnesiac Ceramix has become surprisingly courteous, and probably the originator of the famous reputation for politeness that the French once enjoyed. Psychoanalytix returns to his practice, having mostly recovered... and his fame makes up for any side effects. As for Asterix and his friends, they celebrate their victory with the usual banquet, as Obelix' complex about his weight proves very short-lived.

Note: This volume sees the first appearance of Vitalstatistix's wife, Impedimenta, though she is unnamed and looks quite different to her next appearance in Asterix and the Chieftain's Shield.