Recap / Asterix and the Soothsayer 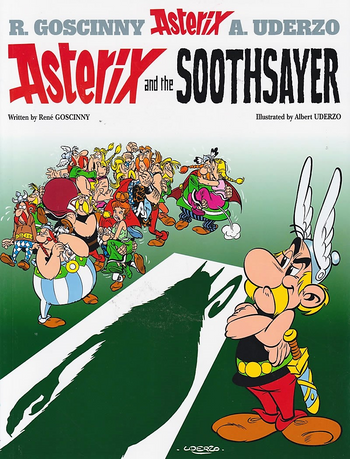 With Getafix away from the village at a druid convention, the Gauls take shelter from a fierce thunderstorm in the chief's house, fearing that the storm is a sign that Taranis, god of thunder, is angry with them. Their worries are ended when Prolix, who claims to be a traveling soothsayer, arrives and predicts that the storm will pass and that a fight will soon break out after reading the entrails of a fish - predictions which both come true. Most of the village is awed by these predictions, but Asterix remains skeptical, claiming that it was just a mixture of luck and realizing that fights break out regularly in the village (especially when Unhygienix's fish is discussed).
Advertisement:

After the storm passes, the soothsayer takes up shop in the forest, making prophecies in exchange for goods. Curious as to why people keep taking their fish/chickens/etc with them for walks in the woods, Obelix (who had argued with Prolix while he was in the village) goes into the woods and finds the soothsayer. While Prolix manages to distract Obelix, Asterix is confused by everyone's behavior, and goes into the woods as well, only to find that the soothsayer has disappeared. In fact, he has been taken by a Roman patrol from the camp of Compendium, the centurion at which, Arteriosclerosus, tells Prolix they are under orders to arrest all Gaul soothsayers. Desperate not to be locked up, he tries to explain that he's not really a soothsayer, he's just a con man living off of Gaulish gullibility. This gives the commander an idea.

While the Romans take the village, Asterix and Obelix wander the forest and run into the returning Getafix. After telling him what's been going on, the druid gets an idea to discredit the soothsayer. Shortly after the Roman commander sends a messenger to report all of Gaul has been pacified, a foul stench erupts over the village, turning all who breathe it a noxious hue. Fearing pestilence, the Romans retreat. Cacofonix, who had snuck back into the village to retrieve his lyre, also smells it and returns to the villagers to report the prediction had come true.

Asterix, Obelix, and Getafix meet up with the other villagers and explain that the source of the stench was a potion that Getafix had brewed, not any divine punishment. The Gauls return home (sinking a pirate ship that had anchored for the night between the island and the village on the way); however, despite everything, a lot of the village wives still believe Prolix is a real soothsayer (because he told them things they wanted to hear). Asterix suggests that they prove otherwise by giving Prolix a surprise. So Getafix brews up an extra-large batch of potion and invites the women to join the men in raiding the Roman camps.

At the camp, Prolix is utterly perplexed by his prediction actually coming true, and perpetually badgered by Arteriosclerosus' belief that the aid of a powerful soothsayer could propel him to the throne. Both these troubles are repelled by an unexpected horde of Gauls trashing the camp. They return from their expedition to find some Roman officials (there to investigate the report of the village being taken) in the village. Vitalstatistix has them roughed up and tossed out.

As Arteriosclerosus prepares to have the soothsayer locked up, the officials that Vitalstatistix had beaten up arrive and punish the centurion for falsely reporting the capture of the village by demoting him to common legionnaire. Outraged by the failures of his soothsayer, Arterioscerolsus orders his adjutant to arrest him, only to be told 1: If Prolix is a fake, then the standing orders to arrest soothsayers don't apply, and 2: Since the centurion is no longer an officer, he has no business giving orders to actual officers. As the now former centurion is set to sweeping the barracks, Prolix is ordered out of the camp. He vows to give up soothsaying, but Taranis remains sceptical...

The Gauls return home triumphant and have a celebratory feast.