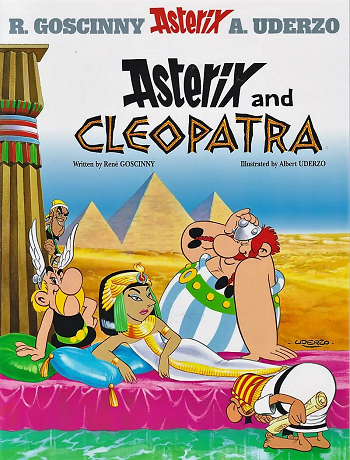 Julius Caesar has insulted Cleopatra VII by saying that the Egyptians have become decadent. To prove him wrong, Cleopatra declares that she will have a palace for him built within three months. The Queen of the Nile warns her architect Edifis that if he fails to make the three-month time limit, he will be fed to the crocodiles. Since such a thing would not be possible without magic, Edifis goes to Gaul and enlist the aid of his friend Getafix, with Asterix, Obelix, and Dogmatix along for the ride.

The construction of the palace is inhibited by Edifis' rival Artifis, who would love to see the former fed to the crocs. Artifis incites a worker's rebellion, and sabotages shipments of stone, but both are stopped by the magic potion. Artifis tries to get rid of the Gauls by first trying to trap them in a pyramid, then framing them for attempting to poison Cleopatra and kidnapping Edifis. The Gauls are able to survive both attempts, and Artifis and his lacky Krukhut are forced to work on the palace without magic potion.

Caesar learns of the Gauls' aid, and not wanting to lose face, tries to capture them. Though the Gauls are able to fend off the Romans, the palace gets wrecked. Asterix and Dogmatix send word of this to Cleopatra, and she puts Caesar in his place. The palace is completed, Edifis receives his reward, Getafix receives scrolls from the Library in Alexandria, and the Gauls return home triumphant.

The comic book and animated adaptation provide examples of the following tropes :

“These Egyptians are crazy!”