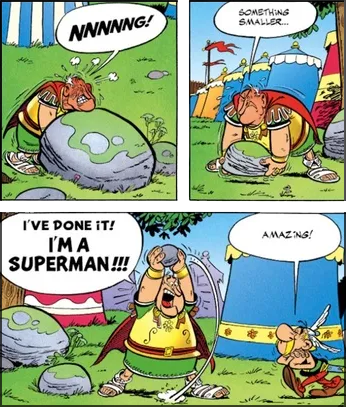 Hooray! He's finally done it! Look at him jump! Look at him yell! Look at his victory dance! At long last, he's finally... won fourth place in a tic-tac-toe tournament?
Advertisement:

Disproportionate Celebration, usually Played for Laughs, is when a character treats a minor achievement as much more impressive than it actually is, and congratulates themselves profusely and/or expects a massive reward. Other characters may also participate in the gag by joining them in their revelry, whether sarcastically or sincerely. This is often Justified by the character being so incompetent at something that even a small achievement in that field is genuinely a massive step forward for them.

Sub-Trope of Comical Overreacting. Compare Small Name, Big Ego and Wants a Prize for Basic Decency. Often crosses over with Unsportsmanlike Gloating if said achievement was winning at a competition. A common response to receiving a Mundane Luxury. Compare Serious Business, where a whole society and/or the work itself portray a trivial activity as extremely important.