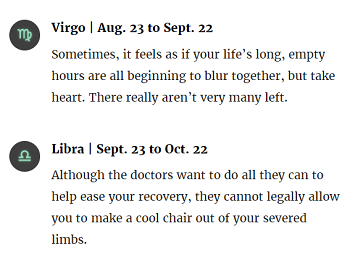 The character is reading the newspaper, looking at the horoscope section. They find their sign, and read something so unbelievably horrifying that they will resort to doing anything or everything to prevent it from coming true.

They have just become a victim of the Horrorscope.

Misfortune Cookie (fortune cookie characters would really rather not get as it includes a grim message or a demotivational phrase) is a related trope.

It may overlap with Strangely Specific Horoscope.