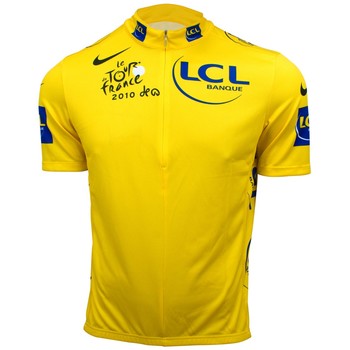 This is what they want to win.
Advertisement:

Le Tour de France. Twenty-one days of cycling about 3500km (2175mi) through France, with stages on flat terrain, in the hills and in the mountains, often totaling an average race speed of about 40 kph for the entire distance. In this race, everyone has an agenda. Whether it is to win a stage for themselves, or helping someone win either the general classification, or one of the secondary classifications (points classification, mountains classification, youth competition, team classification), and you can easily expect everyone to be at the top of their form when they're in this race. It's currently considered the biggest race in the sport, and is part of the UCI World Tour, and is one of the three grand tours (Vuelta a España and Giro d'Italia are the two others). The race was started in 1903, and has been held every year since then, except for the World War I and World War II periods, with a total of 101 races being held.

The Tour de France is a well known race all over the world, with winners from 15 countries and four continents. It enjoys a large following on French television every year, not only because of the competition aspect but also because of its "touristic" value, since it goes through a number of regions and their beautiful landscapes French people are proud of, with commentators talking a bit about local cultures and history in addition to sports matters.

Like the sport in general, Tour de France is home to controversies about doping and corruption, to a point where a YMMV can even be placed next to the name of certain winners. The most winning rider in Tour de France history was Lance Armstrong, with seven victories between 1999 and 2005. As of the 22nd October 2012, Armstrong has been stripped of his titles because of doping. Now the most winning riders are Jacques Anquetil, Bernard Hinault, Eddy Merckx and Miguel Induraín with five each.

Aside from controversies, there are also lots of unwritten rules in the race that one would be expected to follow. For example, if a general classification contender, or more of there, are dropped due to an accident, the race is effectively neutralized until said contender is back up. Note that this rule does not apply if there's a GC threat in a breakaway ahead, or on some early sprinter stages where the GC-lead is theoretically up for grabs, or sprinter teams have an interest of winning the stage, as they have their own classification to look out for.

Despite this being a French event, no French rider has actually won the race since Bernard Hinault won in 1985, and since Richard Virenque finished second in 1997, it took 17 years before another French rider was on the podium, as Jean-Christophe Peraud finished second and Thibaut Pinot finished third in 2014. The following nations have a Tour de France winner (in order of first victory): France, Luxembourg, Belgium, Italy, Switzerland, Spain, Netherlands, USA, Ireland, Denmark, Germany, Australia, United Kingdom, Colombia, and Slovenia.

There are a few internal competitions in the race, which are following:

The most recent winners of the different competitions are listed here:

After over 100 editions, this race does have some tropes in it: