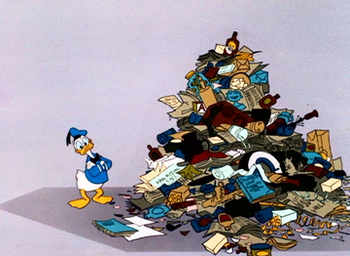 The Litterbug is an animated short released in 1961 produced by Walt Disney and directed by Hamilton Luske. It would be the last theatrical short from The Golden Age of Animation to feature Donald Duck, though the character would appear in a few educational shorts released later that decade.

The short examines a peculiar type of pest that’s proven to be a major nuisance to society: the Litterbug (with Donald Duck playing the title role). Various types of Litterbugs that consciously or unconsciously leave a lot of trash in their wake are explained with the help of a book on Pest Control.

Tropes in this Short: