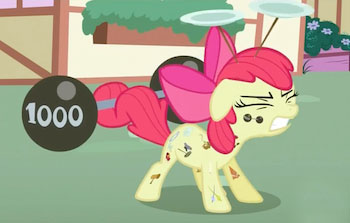 I guess there really is such a thing as having too much talent.
Applejack: Yee haw, little sis! Congratulations on gettin' not just one, but two cutie marks! We're mighty proud of you, right Big Macintosh?
Big Macintosh: Eeyup!
Applejack: I've never seen anythin' like it, have you Big Mac?
Big Macintosh: Nope!
Written by Amy Keating Rogers
Advertisement:

One bright sunny day, Apple Bloom and the Cutie Mark Crusaders decide to try their hooves at bowling! They fail miserably (as usual), but what's this? As Apple Bloom makes her throw, someone yells "Cool! A bowling cutie mark!" Apple Bloom, excited, looks at her flank... which is still bare, as the cheers were for a young colt who happened to get a strike in the next lane and get his cutie mark. To add insult to injury, her own ball finally completes its meandering journey to the pins, only to bump against one without even budging it.

Despondent over her latest failure and resistant to her friends' efforts to cheer her up, Apple Bloom wanders into the Everfree Forest, where she stumbles down a hill and chips her tooth. Fortunately, Zecora invites her to her hut, and quickly mixes a potion to fix the tooth. When Apple Bloom wonders if there's a brew to give her a cutie mark, Zecora explicitly states that no such thing exists, then uses a flower named "Heart's Desire" to make a potion for a crow-less rooster. After Zecora steps out to get some amethyst, Apple Bloom eyes the flower and thinks there might be a way to get her cutie mark after all...

At school the next day, Apple Bloom shows up proudly sporting her new cutie mark! It turns out she's really good at playing with hula hoops, performing so well that Cheerilee cancels the day's curriculum so everypony can learn from her while the fillies cheer Applebloom on. Then in the middle of a trick, she gets another cutie mark — in plate-spinning! As she crashes in surprise, Diamond Tiara and Silver Spoon proclaim her to be a fraud. To everypony's astonishment (including her own), Apple Bloom is immediately proficient, effortlessly hula hooping and spinning plates simultaneously. Soon the entire class ends up in Ponyville, where Apple Bloom mesmerizes everypony with her acrobatics.

Desperate for a cure, Applejack takes Apple Bloom to see Twilight Sparkle for help. Twilight soon discovers that Apple Bloom has caught the Cutie Pox, a puzzling plague that perplexed ponies back in the paleo-pony period, where ponies earned multiple cutie marks and were compelled to act out every one of their talents. When Apple Bloom starts to speak in French, they resolve to find Zecora to ask for a cure, but are held back as Apple Bloom develops even more cutie marks and is immediately driven to perform each one. The citizens of Ponyville start to panic…

Everypony immediately barricades themselves indoors. Just then, Zecora arrives; Twilight briefs her on Apple Bloom's condition, and Zecora mentions she came by because she was tracking down some ingredients that disappeared from her hut. Fortunately, Zecora happens to have a cure for Apple Bloom — the Seeds of Truth, a flower that will flourish once the truth is told.

Apple Bloom resists at first, but eventually confesses that her marks appeared because she used Zecora's ingredients to make a cutie mark potion. The seeds suddenly sprout into a beautiful blossom; Apple Bloom hungrily devours it, whereupon her cutie marks immediately disappear. Ashamed, Apple Bloom apologizes to everypony for getting carried away with her quest for a cutie mark. All is forgiven, with the promise that Apple Bloom will learn from her mistakes. She then dictates a letter to Princess Celestia about her lesson learned — that there are no shortcuts in life, that honesty is always the best policy, and all good things come to those who wait.

Not five seconds after saying that, the Cutie Mark Crusaders announce that they've waited long enough, then happily run off into the distance to do some more crusading. Maybe Zecora can help them get their marks in potion-making!

Will anything cheer her up? No, it won't!

Will anything cheer her up? No, it won't!