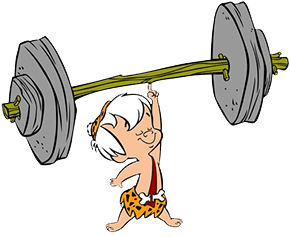 He's the strongest toddler in the whole land
Tear your arm off if he's shaking your hand
—"Weird Al" Yankovic (describing Bamm-Bamm from The Flintstones) in "Bedrock Anthem"
Advertisement:

These little kids have strength that puts The Incredible Hulk to shame, and an attitude to match. And don't you forget it! Those who mix it up with them the first time and demonstrate their ignorance have a short life expectancy. This tends to be more common in girls than boys for the surprise factor, but it can be found in both.

Compare with Small Girl, Big Gun, Cute Bruiser, Little Miss Badass, Pint-Sized Powerhouse, Glacier Waif, and Waif-Fu. If an Enfant Terrible is this, you're in real trouble. Probably a Badass Adorable. A Child Mage is when they "casts the spells that makes the people fall down" instead of just pummeling them. For examples where kids are omnipowerful, see Goo-Goo-Godlike.

Daigo tells Fudo how even as a little girl, Desumi was ridiculously strong.

Daigo tells Fudo how even as a little girl, Desumi was ridiculously strong.