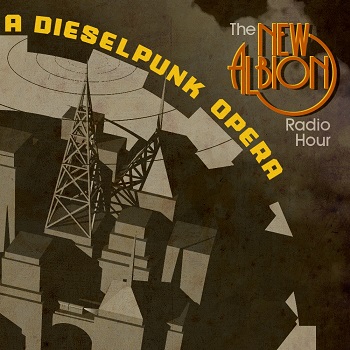 "Brought to you by Papaver Cigarettes!"
Advertisement:

The New Albion Radio Hour: A Dieselpunk Opera is a 4-Act opera composed and written by Paul Shapera. It is the sequel to The Dolls of New Albion, and the audio version of the entire play can be found here

The Dieselpunk Opera occurs ten years after the events in Dolls of New Albion, and the featured family this time around is the O'Briens, with Constance O'Brien and her father John being the main protagonists. The story is told by an all-knowing Narrator, who describes a New Albion torn apart by war.

The story of New Albion is continued in its sequel, The New Albion Guide To Analogue Consciousness.