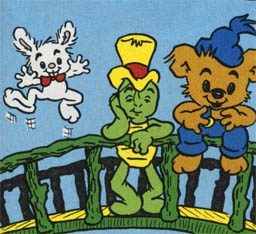 Bamse (Teddy Bear) is a Swedish children's comic (aimed at the very youngest readers) created by Rune Andreasson, started off as a half-page weekly cartoon in 1966. Got its own comic-book in 1973. It has been translated to all the Nordic languages and had short publishing runs in Belgium and the Netherlands, as well as failed attempts to launch it in Great Britain.

The series details the adventures of various Funny Animal characters as they go about their lives. The series is known for having a strong moral stance, while at the same time often presenting rather dark issues or complex problems in a way suitable for very young children (A famous "Letter from the Editor"-page started with "Your parents don't want you to know about this just yet, but I think that it is important that you learn about this" and then moved on to explain The Holocaust to children.)

The cast has gradually expanded as the series went on, the original Power Trio of Bamse the bear (mostly the Big Guy even though he's small... almost verging on a Cute Bruiser considering that most other adult characters are actually much larger) Skalman the turtle (Absent-Minded Professor sometimes bordering on Mad Scientist and also The Spock) and Lille Skutt the rabbit (Fragile Speedster and Cowardly Sidekick, although he has enough incidents of bravery that he approaches The So-Called Coward) and to some extent their friends and antagonists. The second Cast Herd is made up mainly of the triplets of the titular character (artistic Brum, Tom Boy Nalle-Maja and Badass Bookworm Teddy) and to some extent their friends.

Bamse is made super-strong by eating dunderhonung ("thunder honey"), a dish (which, according to Word of God, is not just honey but includes a bunch of ingredients, including a secret plant and some pepper) that is brewed by his grandmother.

The series is somewhat (in)famous for its status as an Author Tract (sometimes dropped into the narrative itself, sometimes in separate educational pages or on the letter column) Also, almost every villain is given a Freudian Excuse.

Now has a character page, but given the vast amount of characters, it could always use more work.

The characters have grown and developed as the series went on, both Bamse and Lille Skutt are married and have children, and for a while their kids aged almost in Real Time, although they stopped aging when they started school.