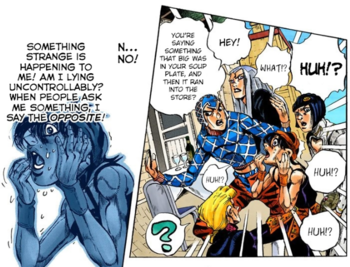 Certain types of monsters, wizards, and other supernatural or alien beings are able to control your voice, or otherwise replace your communications with those around you. They will use your voice to lie to teammates, friends and loved ones, or to deliver warnings or threats. Sometimes this is the beginning of full on Mind Control, or the opening move of the Puppeteer Parasite.

Most of the examples fit into the subtropes:

Sub-trope of People Puppets. Frequently part and parcel of Puppeteer Parasites' abilities. May overlap with Answering Echo if the person can only repeat the last words of another. Inversion of Can Only Move the Eyes, where the person retain the ability to speak when they are being controlled. See Mission Control Is Off Its Meds for cases where a remote voice over a comm channel is hijacked and subverted. Magical Profanity Filter is a sub-trope where people become unable to swear, but can otherwise still communicate.