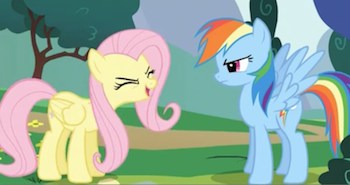 Rainbow Dash is busy prepping herself for the Best Young Flyers' Competition in the pegasus city of Cloudsdale, with Fluttershy as her hopeful cheering section (easier said than done, considering she usually can't speak louder than a whisper). However, despite her being able to ace all the other parts of her routine, Rainbow can't quite manage her difficult finishing move: the Sonic Rainboom, a near-impossible move where a pegasus flies fast enough to create a sonic boom and a rainbow at the same time. Despite Rainbow Dash acting cocky about how she can ace the competition (and win the grand prize: a day hanging out with the Wonderbolts!), Rarity detects that the pegasus is a lot more nervous than she lets on, and talks Twilight Sparkle into finding a spell to allow the wingless members of their circle of friends to go up to Cloudsdale and provide more moral support than Fluttershy can give. Twilight finds a rather difficult spell that will allow her to give a pony wings, and Rarity offers to be the test subject.

The day of the competition arrives, and after an encounter with a few old bullies from flight school (and Fluttershy botching the die roll on "Make Motivational Speech"), Rainbow Dash finds herself on the verge of a nervous breakdown over whether or not she'll win.

Rainbow Dash: What do I do?! Everypony is gonna see me fail! The Wonderbolts will never let a loser like me join! Princess Celestia will probably banish me to the Everfree Forest! MY LIFE IS RUINED!

Suddenly, who should show up but Rarity, sporting a beautiful pair of colorful, translucent butterfly wings. The other ponies show up as well, via Twinkling Balloon, as Twilight was able to find an easier spell to let them walk on clouds. Encouraged by her friends' presence, Rainbow Dash decides to show them around Cloudsdale. As they tour the town, however, Rarity keeps vainly showing off her new wings (ignoring Twilight's warnings that they're extremely fragile), making Rainbow Dash feel even more self-conscious. And as if that weren't enough, Rarity's new admirers suggest she enter the Best Young Flyers' Competition as well!

And so the competition begins, presided over by not only the Wonderbolts, but also Princess Celestia herself. Rarity and Rainbow Dash get slowly pushed near the end of the show; Rarity is too busy in her dressing room (putting on a rather garish getup), and Rainbow Dash keeps changing the order of the contestants as she still doesn't feel ready. Finally, both ponies have to go on together, despite Rainbow Dash having been reduced to a nervous, shaking wreck. Rainbow Dash tries to go through her routine while Rarity struts her stuff in the air, but Rainbow ends up messing up the first two parts of it, leaving only one chance of saving herself from losing: the Sonic Rainboom.

Meanwhile, Rarity, her ego having inflated to ridiculous levels, decides to fly up as close to the sun as possible, letting the light shine through her wings and covering all of Cloudsdale in colorful light. Almost immediately though, her wings get incinerated in the heat, leaving Rarity to plummet to the ground. Three of the Wonderbolts dive down to save her, but get knocked out by Rarity's wild flailing through the air. Rainbow Dash spots her friend and her heroes in trouble, and flies to the rescue. As she does so, she goes fast enough to not only catch up to them, but to successfully pull off a Sonic Rainboom in the process, surprising the crowd and causing Fluttershy to cheer louder than ever. Rainbow Dash is so busy snatching the falling ponies out of the air that she doesn't even realize what's happened until she starts soaring back to the arena. The crowd starts to cheer as loud as Fluttershy! Having perfected her winning move and saved the Wonderbolts and Rarity, Rainbow Dash excitedly declares it the "best day ever!"

After the celebration, Rarity apologizes for stealing the spotlight and being too vain and prideful, and Rainbow Dash and the others forgive her, regretting only not being able to meet the Wonderbolts when they were conscious. At that moment, who should show up but the Wonderbolts themselves, who thank Rainbow Dash for saving them. To make things even better for the already excited young pegasus, Princess Celestia shows up to declare Rainbow Dash the winner of the competition. The Princess then turns to Twilight, asking if she's learned anything about friendship lately, and Twilight decides to let Rarity declare the Aesop of the episode: that one should "keep your hooves on the ground" and be supportive of your friends. Meanwhile, Rainbow Dash is approached by her old bullies, who apologize for the way they treated her, and want to hang out. Rainbow Dash turns them down, saying that "I've got plans!" as she flies off with two male members of the Wonderbolts…

Twilight Sparkle makes some magical butterfly wings for Rarity, warning her that they are very delicate. Ignoring this, Rarity enters a flying competition to fly as high as possible so that the sun would shine through her wings and cover Cloudsdale in colorful light. The sun then disintegrates her magic wings, causing her to fall from the sky.

Twilight Sparkle makes some magical butterfly wings for Rarity, warning her that they are very delicate. Ignoring this, Rarity enters a flying competition to fly as high as possible so that the sun would shine through her wings and cover Cloudsdale in colorful light. The sun then disintegrates her magic wings, causing her to fall from the sky.