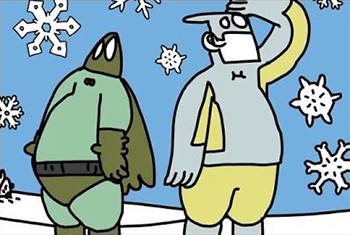 Let's admit it: snowflakes are beautiful. They look like very intricate six-branched stars made of ice. The problem is that they are tiny teensy things that can hardly be distinguished with the naked eye, and they often fall in aggregates.

In some fictions, though, snowflakes are much bigger, allowing the viewers to see them individually even from far away, in their full six-points glory. Some works also features them as characters or enemies, typically in Slippy-Slidey Ice World settings.

Interestingly, some works take liberties with the number of points each snowflake possesses (see the top image, where they have eight), despite snowflakes that don't follow sixfold symmetry being incredibly uncommon. One would also be hard pressed to find a fictional snowflake that doesn't have a starry pattern, despite the fact that snowflakes can take pretty much any form — as long as it does follow sixfold symmetry. Some examples can be seen here

Unrelated to Special Snowflake Syndrome and Cast of Snowflakes.