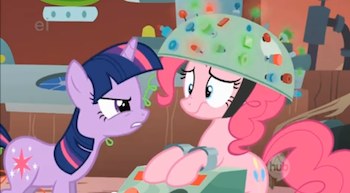 Twilight studies Pinkie. For Science!!
Pinkie Pie: It's my tail! It's my tail! It's a-twitchin' twitchin'! And you know what that means!
Twilight Sparkle: Actually, Pinkie, I haven't the slightest idea.
Written by Dave Polsky
Advertisement:

Twilight Sparkle learns that Pinkie Pie has an unusual ability to sense happenings in the immediate future based on twitches and tics of her body, known as "Pinkie Sense". Twilight is skeptical, but much to her frustration all of Pinkie's predictions seem to come true... and even more frustrating is that they all seem to target Twilight for some reason, whether it's falling objects, slamming doors, or an alligator in the bath tub.

Twilight tries to investigate Pinkie's so-called abilities with the intent of disproving them, but her efforts are hampered by her own impatience and a series of slapstick disasters, all of which are seemingly predicted by the Pinkie Sense. There's clearly a pattern going on, but Twilight stubbornly refuses to admit it. When Pinkie suddenly predicts "a doozy" of an event happening in the Froggy Bottom Bog, Twilight tags along with her friends only out of concern for Fluttershy, who had earlier gone there to help some frogs find a new home.

The gang finds Fluttershy safe and sound in the marsh, and Twilight is all set to rub it in that the Pinkie Sense has apparently failed... but she never gets the chance, as a vicious hydra emerges from the swamp and attacks! A frantic chase ensues, and Twilight is forced to buy time for her friends to get to safety. Twilight herself only escapes the hydra by trusting in the Pinkie Sense and making a literal leap of faith. Much to Twilight's bafflement, it turns out the hydra attack wasn't "the doozy" Pinkie had predicted, but she's too worn out to be angry for long. Twilight finally admits that Pinkie's senses are real, even if she doesn't understand how or why they work. And guess what? The "doozy" Pinkie predicted was Twilight admitting she was wrong.

Later, Twilight prepares a letter to Princess Celestia with her lesson for the day (that there are some things you don't have to understand completely to accept as real or true), then goes to hang out with Pinkie. Her Pinkie Sense is telling her there'll be another falling object today, but she and Twilight are prepared. Spike, however, is not prepared for Princess Celestia literally dropping in to pick up Twilight's report in person.