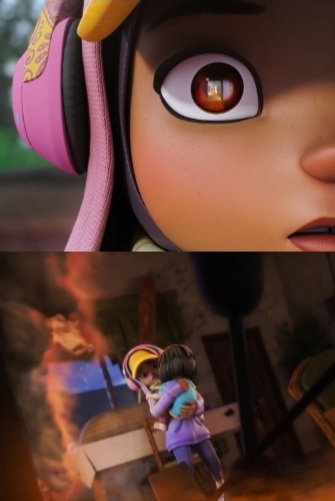 "By the way, what's with all the obsessive eye shots? Do we really need to see the movie told from everybody's cornea? [gets super-close to screen] WOULD YOU LIKE TO SEE THE WHOLE ENTIRE MOVIE TOLD LIKE THIS? I DON'T THINK SO!"
— Raoul Puke, on We're Back! A Dinosaur's Story
Advertisement:

The old saying is that the eyes are the windows of the soul, and this trope treats the eyes as the windows to the memory bank as well.

A character is suddenly reminded of something. Rather than the old trope with the ripple and harp, fade out, or echo, the camera zooms to an extreme closeup of their black pupil — which suddenly becomes a dark tunnel. At the other end, a light! And that light leads to the memory Flashback the character is experiencing. The viewer gets to see the significant memory (because it's almost always significant) often with an eye-shaped aura around it, then the tunnel view reverses, coming back out the character's eye — the same one, or the other one.

Unlike Flashback Stares, which apparently goes on long enough to hang a lampshade on why a person is staring off into space, the Eye Recall memory visions appear to be pretty much instantaneous, or at the most only a few seconds from what's occurring real-time that triggered the memory.

The Eye Recall can also trigger a "Eureka!" Moment when the memories viewed through the eye tunnel are compared with new information. And occasionally an Imagine Spot will mimic the same Eye Recall effect.

Not to be confused with asking people to return their eyes due to a safety issue with them.

Upon tasting Remy's Ratatouille, Ego has a flashback to when his mother cooked him Ratatouille to comfort him after he fell off his bike.

Upon tasting Remy's Ratatouille, Ego has a flashback to when his mother cooked him Ratatouille to comfort him after he fell off his bike.