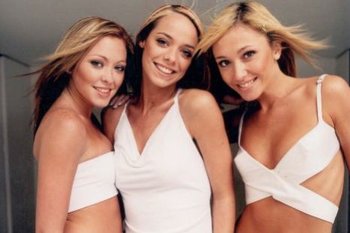 Atomic Kitten, dubbed "The Kittens" by their fans, were an English Girl Group that formed towards the end of the 90s. The band were devised by Andy Mccluskey (of Orchestral Manoeuvres in the Dark fame) as an obvious attempt to cash in on the growing Girl Group craze. They had three members to start off with - Natasha Hamilton, Liz McClarnon and Kerry Katona. Initially Heidi Range was set to be in the band in Natasha's place but left due to artistic differences and later joined the Sugababes. Katona also left the group in 2000 to focus on raising her children. She was replaced by Jenny Frost, who stayed with the group until the split.

The Kittens were initially only mildly successful, their first album "Right Now" and their first four singles doing poorly. The label was considering dropping them but their manager convinced them to allow the girls to release one last song. This song was "Whole Again" and became their first number 1 single. They were much more successful in Europe, Asia and Australia but didn't quite make it in America. They stayed together until 2004 when they had a mutual split but they have reformed several times for one-off appearances. Kerry Katona reunited with the group in 2012 for The Big Reunion - ironically replacing Jenny due to her own pregnancy this time. Michelle Heaton of Liberty X filled in for Liz during a 2016 tour. In 2017 Katona left the group for a second time leaving the group as duo - until mid-2021 when Frost reunited with the group.

Liz and Jenny appear as themselves in the film Mike Bassett: England Manager. Their single "See Ya" can be heard in Bring It On, their cover of "The Tide is High (Get the Feeling)" is prominently featured in The Lizzie McGuire Movie and their very first single "Right Now" appears in Aquamarine.

This girl group provides examples of: