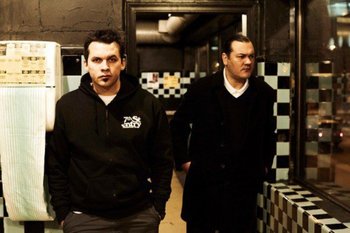 Slug and Ant
Atmosphere is an American Hip-Hop duo from Minneapolis, Minnesota. It's composed of rapper Slug and producer Ant. The group initially began with another rapper, Spawn, who ended up leaving after the first album. The group was a duo for many albums afterwards, though recently they've incorporated a keyboardist and a guitarist.
Advertisement:

Slug puts a lot of emphasis on storytelling, via strong lyricism. Though his earlier albums are seen as angsty and confessional (tending to be personal or introspective reflections), later works contain a variety of complex narratives about diverse people, such as a waitress who gets revenge on her now homeless father ("The Waitress") and a young girl who escapes an abusive father through music ("In Her Music Box").

There is also a ton of additional material out there, such as the Bad Dub mixtape series and various bootleg compilations.

Tropes that apply to Atmosphere