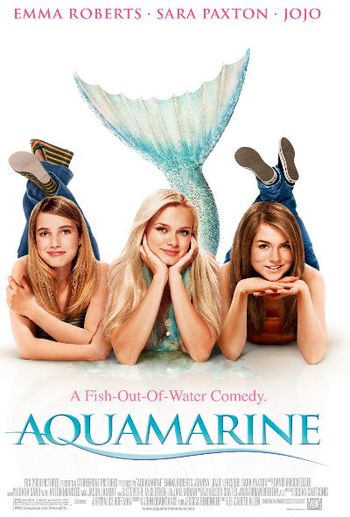 Aquamarine is a 2006 children's film directed by Elizabeth Allen and loosely based on the children's book of the same name by Alice Hoffman.

It tells the story of two friends, Claire Brown (Emma Roberts) and Hailey Rogers (Joanna "JoJo" Levesque) who are due to be separated in five days when Hailey moves to Australia. After a violent storm, they discover a mermaid named Aquamarine (Sara Paxton) in the swimming pool of their beach club. The mermaid tells them that she came to find love, which she has heard of but never experienced. Furthermore, she made a deal with her father that if she cannot prove love exists in three days, then she will have to return to enter an arranged marriage. She notices handsome lifeguard Raymond (Jake McDorman), also desired by the girls, and promises them that if they help her win his heart, then she will grant them one wish.

The girls immediately agree, seeing the promised wish as their opportunity to avoid being separated. But can they find proof of love in time?

And as if they didn't have enough problems already, Claire and Hailey's Rich Bitch rival Cecilia Banks (Arielle Kebbel) is growing increasingly suspicious this "fishy" girl and intends to find out what her secret is.

Not to be confused with a certain DC merman superhero.