Music / Orchestral Manoeuvres in the Dark 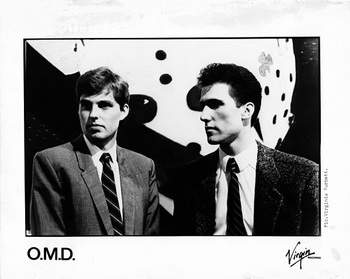 Enola Gay, you should have stayed at home yesterday,
Oho it can't describe the feeling and the way you lied,
These games you play, they're gonna end it all in tears someday,
Oho Enola Gay, it shouldn't ever have to end this way.
— "Enola Gay"
Advertisement:

Orchestral Manoeuvres in the Dark (often abbreviated to OMD) are a Synthpop group formed in the Wirral, UK, in the mid-'70s by Andy McCluskey and Paul Humphreys.

Their real fondness was for bands like Kraftwerk and Neu!. Their first three albums were filled with very intellectual stuff but had one or two hit singles each, keeping the record company happy (very happy with Architecture and Morality, which was an international hit album and spawned three hit singles, two about Joan of Arc). Their fourth just had the weird stuff with no hits. The record company had a little word with them, and subsequent albums were entirely written to the hit formula.

They split in the late '80s, with Face of the Band McCluskey retaining the name and releasing three more albums, which were actually reasonably successful, while the rest of the former members formed issued one, not so successful, album as The Listening Pool. After a bit of a hiatus, during which McCluskey masterminded the early hits of Atomic Kitten, among other things, the classic lineup reformed and has toured and recorded new material to some acclaim.