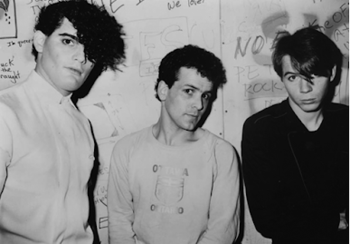 Our Daughter's Wedding was an American New Wave-Synth-Pop band consisting of Keith Silva (vocalist & keyboarder), Layne Rico (synthesiser), and Scott Simon (bass-synth & saxophone). The trio started in 1977, releasing a mini-album, Digital Cowboy in 1981. "Lawnchairs", their first single, became a #49 hit in the UK Singles Chart in August of that year. They appeared on MTV as guest hosts, and toured alongside other New Wavers such as Duran Duran and Iggy Pop. Their second release, Moving Windows, in 1982, was a full-length album combining synth-pop & funk, but was a flop with no hit singles. Floundering on as a support for The Psychedelic Furs for a few more months, the band dissolved in 1983, making them yet another short-lived New Wave group, one almost completely forgotten today.

Our Daughter's Wedding provides examples of: