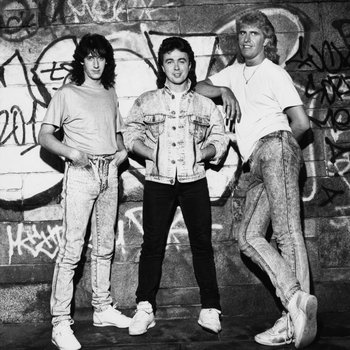 From left to right: Alan Jackman, Tony Lewis, John Spinks
Josie's on a vacation far away
Come around and talk it over
So many things that I wanna say
You know I like my girls a little bit older
I just wanna use your love tonight
I don't wanna lose your love tonight
—"Your Love"
Advertisement:

The Outfield was a British rock band formed in London in 1984. For most of its life, its lineup consisted of bassist and lead singer Tony Lewis, guitarist John Spinks, and drummer Alan Jackman. The three previously formed a band of a similar style known as "Sirius B" during the late '70s, but their sound was largely overshadowed by the popularity of Punk Rock during that time. When they got back together, the band was initially known as "The Baseball Boys", but later changed their name at their manager's insistence.

Their style mostly is straightforward power pop and pop rock, but with some elements of New Wave Music. They are most well-known for their song "Your Love" (not "I Don't Wanna Lose Your Love", which is actually a different song by Crystal Gayle), which reached #6 on the Billboard Hot 100. They're often mistakenly seen as a One-Hit Wonder, as this is the only song of theirs that still plays on the radio, but they actually had many hits during the '80s in the U.S., despite being obscure in the UK, which was the result of them being marketed more towards an American audience because of their "American-sounding" genre (Their mixture of New Wave Music and Power Pop had previously been done by the American Cars). A few of their other hit songs include "All the Love in the World", "Since You've Been Gone", "Voices of Babylon", and "For You".

Unsurprisingly from this overseas success, and as you can tell by both of their names, John Spinks, who was the principal songwriter for most of their songs, preferred American sports such as baseball as well as American football (without even really being familiar with the sport, being British), and even referred to soccer (which is known as "football" in most places that are not America or Canada) with that exact term.

The band's popularity declined in the early 1990s, and they eventually returned to their roots playing in British pubs, though they continued to release albums periodically. They officially broke up after John Spinks died in 2014. Tony Lewis continued to write solo music until his own death on 19 October 2020.