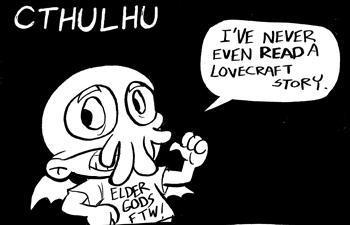 The Cthulhu Mythos: one of many things nerds can't get enough of.
"I love this book so much I nearly read it!"
— Justin Long on the cover of John Hodgman's More Information Than You Require
Advertisement:

Praising Shows You Don't Watch is the inverse of Complaining About Shows You Don't Watch, in which these people somehow know exactly how good something is, without having ever actually seen it. Maybe they saw so much praise they feel like they can account for having actually watched it for themselves, or maybe they're just carbon-copying someone's opinions to fit into the group. Or they have seen a fragment of the work, liked it, and assumed the rest is equally good. Or perhaps they've seen the Audience Coloring Adaptations and decided they really liked those, which means the original must be just as awesome or even better. Who knows? Similar to somehow knowing a show is utter crap without having seen an episode, it's one of the greatest mysteries of human culture, and has only been exacerbated by the Age of the Internet.

This is often a major contributor to Mainstream Obscurity. When it becomes really commonplace, Popcultural Osmosis Failure is not far behind.