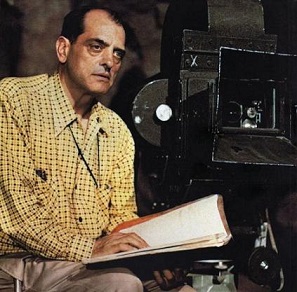 "People always want an explanation of everything. It is the consequence of centuries of bourgeois education. And for everything for which they cannot find an explanation, they resort in the last instance to God. But what is the use of that? Eventually they have to explain God!"
Advertisement:

Luis Buñuel Portolés (22 February 1900 – 29 July 1983) was a Spanish filmmaker best known for his surrealist works such as Un Chien Andalou, L'Age d'Or and The Discreet Charm of the Bourgeoisie. He debuted in 1929 with Un Chien Andalou, which was his first taste of the controversy and negative reactions he would experience over the years. Over his career, he would win several awards at film festivals around the world, and Discreet Charm won the Academy Award for Best Foreign Film. He died in Mexico City, Mexico in 1983.

Works by Luis Buñuel that have pages on TV Tropes: (in chronological order)