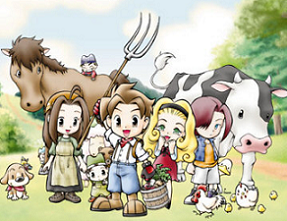 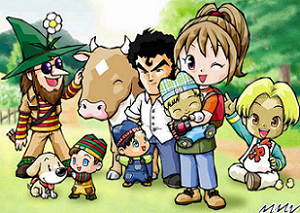 Harvest Moon: A Wonderful Life and Harvest Moon: Another Wonderful Life are two Nintendo GameCube games in the Harvest Moon (now known as the Story of Seasons) series by Marvelous Interactive, the latter being a gender-swapped version of the former. An Updated Re-release of the first game exists as a PS2 port, with an additional bachelorette and the ability to have a daughter, though this version has slightly worse graphics, a halved framerate, and loading screens when the original had none.

It's somewhat darker in tone than the rest of the series, themes of adultery, divorce and loneliness are approached quite seriously, though nothing "child-inappropriate" is explicitly referenced. It's also the first game to realistically imply your cows mating, though Takakura seems to try to hide this fact from you, which is odd considering your character's old enough to have their own children.

The game is something of a black sheep for the series, as it's the first to subvert many of the series' ancient constants. Unlike every previous game, time does pass inside buildings, characters age, marriage is a necessity to continue playing, there are no festivals, none of the previous characters made appearances, and the main character doesn't wear a hat. The game was given a sequel in 2006 as Harvest Moon DS, which can be seen a mix between this game and Friends of Mineral Town.