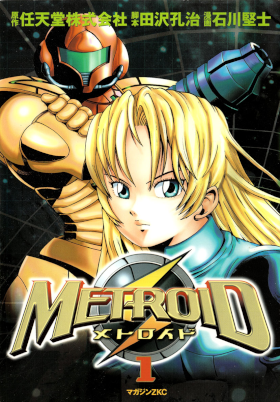 "When we had to run from Zebes and defeat the Space Pirates alone, I decided what I was to be from then on. And I am... a warrior!"
—Samus Aran, Chapter 14
Advertisement:

When the Galactic Federation mining colony K-2L is attacked by Ridley and his Space Pirates, the only survivor is a 3-year-old girl named Samus Aran. Rescued by two members of the declining Chozo race, Samus is raised as one of their own. Infusing her with Chozo DNA to survive the harsh conditions of their home planet Zebes, and equipping her with an advanced suit of Powered Armor, the Chozo raise Samus as a warrior who will follow in their duty as protectors of the galaxy. Then a Space Pirate mothership appears in orbit above Zebes, and everything goes to hell...

Titled simply Metroid, this Monthly Magazine Z manga from writer Kouji Tazawa and artist Kenji Ishikawa is the official Back Story of Samus Aran and the Metroid video game series. Produced alongside the games Metroid Fusion and Metroid: Zero Mission, it draws heavily on concepts introduced by the former and is referenced via Ishikawa-drawn Flash Back images in the latter; both games also include an unlockable art gallery with scenes from the manga. Metroid: Other M would include heavy ties to some events of the manga while Retconning others (most notably the nature of Samus's relationship with Adam Malkovich), though much of the manga was already retconned upon the release of "Zero Mission" itself.

The series would later be collected in two volumes, published in 2003 and 2004, and the first two chapters were also converted into an online "e-manga" with colour, simple animation and sound effects. The Metroid Database has English translations of both volumes, as well as the pages from the e-manga

For the other Metroid manga which ran in the kids-oriented Bom Bom Comics around the same time, see Metroid: Samus and Joey. For the 1993 Super Metroid adaptation illustrated by Benimaru Itoh (which loosely inspired some elements of this manga), see Super Metroid Comics.