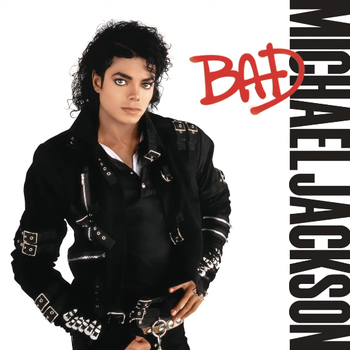 And the whole world has to answer right now
Just to tell you once again: Who's bad?
I'm gonna make a change for once in my life
Gonna feel real good, gonna make a difference
Gonna make it right

As I turn up the collar on my favorite winter coat
This wind is blowin' my mind
I see the kids in the street, with not enough to eat
Who am I to be blind, pretending not to see their needs?
—"Man in the Mirror"
Advertisement:

Bad is the seventh studio album recorded by Michael Jackson. It was released through Epic Records on August 31, 1987.

His third and last collaboration with Quincy Jones, it was the long anticipated Tough Act to Follow after his previous effort Thriller had become the best-selling music album in history.

In a case of What Could Have Been, "Bad" was intended as a duet between Jackson and Prince, but Prince didn't like the opening line "your butt is mine" and thus the idea was thrown in the dumpster. The track "Streetwalker" was intended for the album, but eventually kept off the album in favour of "Another Part Of Me", which according to Frank Dileo, Jackson's manager, felt more danceable. It has now become a gem among Jackson fans who feel it is one of his best unreleased songs.

Bad never reached the same success of Thriller in terms of album sales; considering how well the last album did, it was probably a fool's errand to even hope for it. But it was still a colossal bestseller, going ten-times Platinum in the United States (upgraded to Diamond in 1999 when the RIAA opened Diamond certification) and 13-times Platinum in the United Kingdom.

It was supported by nine singles: "I Just Can't Stop Loving You", the Title Track, "The Way You Make Me Feel", "Man in the Mirror", "Dirty Diana", "Another Part of Me", "Smooth Criminal", "Leave Me Alone", and "Liberian Girl". The first five were all #1 on the Billboard Hot 100, and Top 5 on the UK pop chart. The album was followed by the direct-to-video film, Moonwalker, where the video for "Smooth Criminal" brought a new iconic dance move to Michael's repertoire: the "anti-gravity lean".

Annie, are you troping?