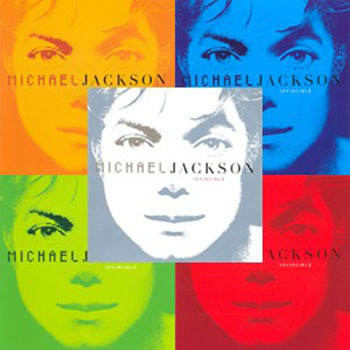 So why ain't you feelin' me, she's invincible
But I can do anything, she's invincible
note Pictured are all of the album cover's colour variants. The silver one is the default cover.
Somebody shakes when the wind blows
Somebody's missing a friend, hold on
Somebody's lacking a hero
And they have not a clue
When it's all gonna end

Stories buried and untold
Someone is hiding the truth, hold on
When will this mystery unfold
And will the sun ever shine
In the blind man's eyes when he cries?
—"Cry"
Advertisement:

Invincible is the tenth studio album recorded by Michael Jackson. Recording for the album commenced in October 1997 and was completed in September 2001. It was released through Epic Records on October 30, 2001.

It is his last studio album to be released during his lifetime, and the last non-compilation album to be composed entirely of original material. It is perhaps most notorious for the Executive Meddling behind its development.

In-between studio sessions for the album, Jackson found himself at odds with Sony over his recording contract. Jackson had expected the licenses to all of his masters from his past album releases to revert to him in the early 2000's. However, thanks to several clauses in the contract, the date was much farther away than he initially thought. On top of this, Jackson also discovered that the attorney who worked with him in the deal was also working for Sony, creating a conflict of interest he was unaware about for at least a decade. This, among other business worries with Sony, led to him informing them that he was leaving the company.

Sony then consequently castrated all promotional efforts for Invincible, including cancelling several single releases, and the few that were kept only got promotional/radio releases, effectively flushing the album's $30+ million budget down the drain. Of the four singles released, only "Butterflies" and "You Rock My World" got radio releases in the US, with the latter becoming Jackson's final top ten entry on the Billboard Hot 100 during his lifetime. On top of this, a 9/11 charity single that was supposed to be released prior to Invincible got cancelled as well, although it would be released digitally a couple years later.

To say Jackson was pissed would be an Understatement. He hurled several insults at Sony, particularly Tommy Molotta, the CEO of the music division at the time, essentially saying that they were, to paraphrase, "holding him and the rest of their black artists back". He also, with the exception of "You Rock My World", refused to appear in any other music video for the album ("Cry", which was released as a single and the only other one to get a video, doesn't feature him in it), and, save for two Milestone Celebration concerts and a 9/11 charity concert he organized, did not tour at all to promote the album. In response, Sony refused to renew Jackson's contract, only releasing the Greatest Hits Album Number Ones because it was the last album Jackson owed them.

At $30+ million, Invincible is reported to be the most expensive album ever made, and by a considerable margin (the second most expensive album ever made is $13 million). These expenses came down to the astronomical $25 million promotional budget and using 9 lavishly expensive producers to record between 50 and 87 songs over 5 years. This was eventually slashed down to just 16 tracks for its release. Music critics and fans have long speculated that a number of songs on the album were about Jackson's ex-wife Lisa Marie Presley. This speculation was bolstered when Presley stated in a 2010 interview that Jackson continued to have an on-again-off-again relationship with her for four years after their divorce.

Invincible would be Jackson's third-last worldwide number one album during his lifetime note The Number Ones and Essential compilations were his final international number one albums in 2003 and 2005, respectively.. However, the drama behind it, and everything else that would occur in his life in the years afterwards, effectively ended Jackson's career on a very bitter sweet note.