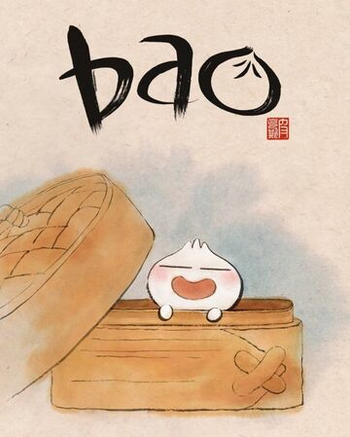 Bao is a 2018 animated short film (eight minutes) directed by Domee Shi, produced by Pixar, one of the Pixar Shorts.

A Chinese woman living in Toronto feels lonely when her husband goes to work. One day she is making bao (Chinese dumplings

note Although a better translation for bao is probably "bun"), when one of the bao she is making suddenly comes to life, sprouting tiny arms and legs, and a face. The woman is startled but quickly comes to love and cherish her little bao son. Years pass and the little bao baby becomes a teenaged boy and then a young man, while still remaining a bao and not actually growing all that much. The bao steadily grows more Westernized and alienated from his traditionalist Chinese mother. The mom doesn't like that, and when the bao brings home a white woman with an engagement ring on her finger, the mother snaps, and makes a terrible mistake.

Bao played in theaters in front of Pixar feature Incredibles 2. Compare Sanjay's Super Team, another Pixar short with similar themes. Notably, this was the final short on which John Lasseter had a producer credit, following his firing from Disney and Pixar the year of the short's release. As of this writing, it's also the studo's final theatrical short: all of their shorts since have been produced as part of the SparkShorts series on Disney+ and all of their features being accompanied by non-Pixar shorts.