Film / The Color of Money 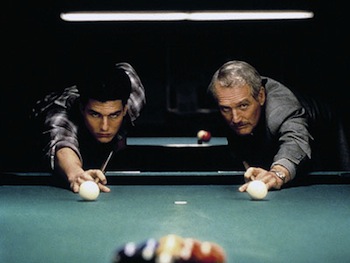 It's in the way that you use it...
Eddie: Do you smell that?
Vincent: What, smoke?
Carmen: No — Money.
Advertisement:

Twenty-five years after he abruptly retired from the world of pool, "Fast Eddie" Felson (Newman) is working as a successful liquor salesman. One day, he meets the skilled but flamboyant pool player Vincent Lauria (Tom Cruise) and his girlfriend Carmen (Mary Elizabeth Mastrantonio). Seeing Vincent as himself as a young man, Eddie takes him up as a protégé and teaches him the way of the Hustler.

The movie version is also known for inspiring John Carmack to pick the title Doom for his medium-altering video game.