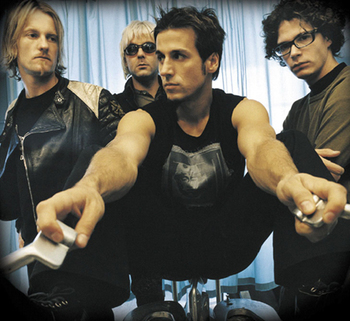 "But ordinary's just not good enough today..."note The classic line up left to right: Duncan Coutts, Mike Turner, Raine Maida and Jeremy Taggart
Ask any Canadian who the biggest rock bands were during the Alternative Rock/Post-Grunge era, or even just who the biggest Canadian bands were in the 90s, and odds are pretty good that one of the first names you'll hear is Our Lady Peace.
Advertisement:

Mike Turner and Michael "Raine" Maida formed OLP in Toronto in 1992, originally under the name As If. It was a mix of covers and originals in their first shows until they came across songwriter and producer Arnold Lanni, and began writing and recording material with him. The band eventually got their more famous Our Lady Peace monicker from a Mark Van Doren poem of the same name.

With two Mikes in the band, Michael Maida adopted the Stage Name "Raine" Maida (eventually having it legally changed). The band signed a deal with Sony Music Canada in April of 1993, and it took almost a year before their debut album, Naveed, was released in Canada, and eventually released in the United States a year after that. Naveed is where the band's eccentric sound, highlighted by Raine Maida's signature wail, was set in stone.

After touring with the likes of I Mother Earth and 54-40 and building some buzz for themselves, the band moved to Columbia Records and released their sophomore album, Clumsy (originally titled Trapeze). It was a breakthrough for the band, spawning several hit singles (such as "Superman's Dead," "4am" and the title track) and eventually becoming a diamond-certified album.

OLP released Happiness... Is Not a Fish That You Can Catch in 1999, which debuted at #1 on the Canadian Albums Chart. It's notable for tackling even weightier subject matter than before, and Raine Maida claimed the album is about "obsessions." The album got mixed reviews from critics, but was another platinum-selling hit. They continued to tackle weightier issues on Spiritual Machines, released in 2000. This album was based around Raymond Kurzweil's 1999 book The Age of Spiritual Machines which guitarist Mike Turner was a huge fan of. Notably, Spiritual Machines was even better received than the previous album, but change was in the air, as this would be the last album recorded with longtime producer Arnold Lanni.

Founding member Mike Turner was gone from the band a week after they started writing and recording with producer Bob Rock. Steve Mazur replaced him, but Turner still has rhythm guitar credits on the album. Said album was Gravity, one of the band's more controversial albums, as it streamlined the band's music back to a basic Post-Grunge sound. While the album met a cool reception from some critics, the album did spawn big hits in "Somewhere Out There" and "Innocent."

The lineup from this album pressed on with 2005's Healthy In Paranoid Times, a more politically charged album, and also produced by Bob Rock. 2009's Burn Burn is not only their shortest album, but was the first album Raine Maida personally produced. Inspired by OLP's 2010 tours performing Clumsy and Spiritual Machines in their entirety, the band released Curve in 2012 in an effort to make something closer to their old sound.

The band released their ninth album in 2018, Somethingness, which was marked by their Canadian tour with Canadian alt-rock peer Matthew Good. It is their first album with new drummer Jason Pierce, after longtime drummer Jeremy Taggart left the band in 2016.

Our Lady Peace are more or less one of Canada's most well-known rock bands in general, who had one of alt-rock's more distinctive sounds, and a long string of hit singles, plus they even broke through to the American market, and internationally. Our Lady Peace also had the rather dubious honor of being the band behind "Whatever," the theme song of wrestler Chris Benoit. When his life ended with a double-murder-suicide, the band could never play it again in good conscience.

Maida has been married to Canadian Singer-Songwriter Chantal Kreviazuk since 1999.