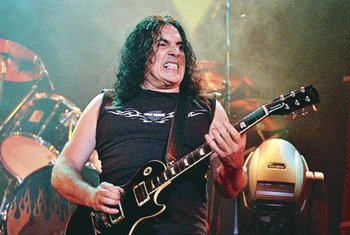 He has been in several rock bands. After being a member of Los Abuelos de la Nada and Los Gatos he started a solo career, named "Pappo's Blues". He also worked with Spinetta and with Billy Bond y La Pesada. He broke up Pappo's Blues and started a new band, Aeroblues, but it was short-lived and he returned to his solo career.

In the 1980s he created Riff, the first Heavy Metal band of Argentina. There was controversy over the violence of the audience, and Riff broke up when a concert at the Ferro stadium ended with massive property damage. Riff returned in 1985, and from then on Pappo made albums with both this band and his solo career.

He died in 2005 in a motorbike accident.