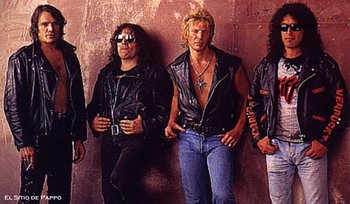 Riff is a heavy metal from Argentina.
Advertisement:

Pappo halted his solo career "Pappo's Blues" in 1980 and started the band Riff with Michael Peyronel, Boff and Vitico. It was the first major heavy metal band in Argentina, taking New Wave of British Heavy Metal influences. They released their first LP "Ruedas de Metal" in 1981, followed by "Macadam 3... 2... 1... 0" and "Contenidos". Most concerts ended in violence, forcing the band to break up in 1983.

Riff returned in 1985, and by this time the local heavy metal scene was more populated. They released "Riff VII", with JAF singing alongside Pappo. The reunion was short-lived, JAF and Vitico started solo careers and Pappo moved to the United States. From that point on, the band stayed as a side-project of Pappo and Vitico, who reunited it several times to release some new album and make some concerts, and then return to their other projects.