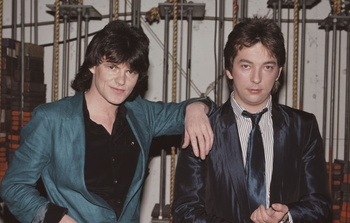 Naked Eyes was an English New Wave-Synth-Pop duo consisting of Pete Byrne on vocals & Rob Fisher on keyboards. Their biggest hit was a cover of the Burt Bacharach & Hal David song "Always Something There To Remind Me". The group released two albums before breaking up in 1985. Rob Fisher died of cancer in 1999.