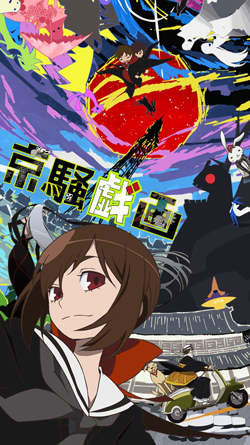 Life; what is it but a dream?
—Lewis Carroll, "A Boat Beneath a Sunny Sky"
Advertisement:

Hidden in an old ink painting is the "Looking-Glass City" of Kyoto, where demons and humans live together and anything broken is instantly fixed. Created by Myoue, a Buddhist monk with the power to bring drawings to life, and his lover Koto, a black rabbit given human form by a kindly bodhisattva, the city is now ruled by their three adopted children: the secretive temple priest Kurama, the aristocratic yet childish demon Yase, and Myoue's lazy, womanizing successor Yakushimaru, who have grown estranged and jaded awaiting their parents' return. One day, a schoolgirl from another world, also named Koto, appears in the city with her "brothers", A and Un, to search for the black rabbit—who she believes is also her long-lost mother.

Kyousogiga is an original net animation written by Izumi Todo (a collective pseudonym for the staff of Toei Animation, who are also the minds behind Ojamajo Doremi and the Pretty Cure franchise) and produced by Toei Animation with the collaboration of Banpresto which debuted on December 2011 on Nico Nico Douga. From September to December 2012, five additional shorts were released which expanded the setting and characters. After it garnered sufficient attention, a TV series was greenlit for the Fall 2013 anime season. The original ONA series was adapted as a two-volume manga serialized in Dengeki Maoh from February 2012 to March 2013. Another manga adaptation following the TV series was serialized from November 2013 to March 2014 issues.

The series contains a lot of Buddhist imagery along with Alice Allusion motifs, with sprinkles of Shinto here and there.