Film / Bring It On 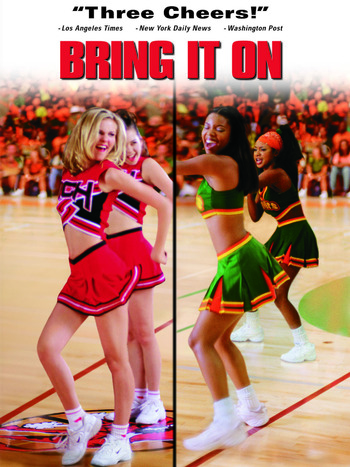 Bring It On is a Troperiffic film franchise, currently containing six installments. Only the first was released as a theatrical film, the other five were released Direct to Video.

This franchise is mainly about one cheerleading squad squaring off against another, both taking it way too seriously.

Though it is a series, each sequel is more In Name Only, rather than a real sequel. There are few recurring elements besides cheerleading competitions where hilarity usually ensues throughout the attitude-filled drama. No two movies contain the same characters or locations.

A major theme in the series is ethnicity and race. The writers/producers view race as very important, whereas the characters are nonchalant about it (except maybe the villain used as an outlet for the writers to express latent racism).

More mildly the casting of cheerleaders as the heroes is itself oddly subversive (and refreshing) given the nearly universal negative depiction of cheerleading in other High School Movies. The films are not beyond a little ribbing at the sport but are clearly sympathetic.

Not to be confused with the trope named "Bring It".

Brief synopses for each movie in the series:

The upper-class Toros cheerleading squad from Rancho Carne High School in San Diego has got spirit, spunk, sass, a token Asian, and a killer routine that's sure to land them the national championship trophy for the sixth year in a row. But for newly-elected team captain Torrance, the Toros' road to total cheer glory takes a shady turn when she discovers that the Toros' former cheer captain had STOLEN the perfectly-choreographed routines from the ghetto-fabulous Clovers, a hip-hop squad from East Compton, who are black. While the Toros scramble to come up with a new routine, the Clovers, led by squad captain Isis, have their own problems — coming up with enough money to cover their travel expenses to the championships. With time running out and the pressure mounting, both captains drive their squads to the point of exhaustion: Torrance, hell-bent on saving the Toros' reputation, and Isis, more determined than ever to see that the Clovers finally get the recognition that they deserve! Who will survive and what will be left of them? This installment is commonly thought to be the best for its refusal to name one squad as evil, and for an ending that deliberately does not fit the time-worn mold for the genre. As a theatrical production, it also had a higher budget than the others. It's currently considered a bit of a teen girls' classic chick flick and is standard sleepover/girls' night fare. Starred Kirsten Dunst, Eliza Dushku, Gabrielle Union and an immediately pre-Buffy the Vampire Slayer Clare Kramer.

Torrance is played by another actress, so she changes her name to another town in SoCal called Whittier. Whittier tries out for and joins her new college cheerleading squad to relive her high school glory days as head cheerleader. But when she and her best friend Isis — I mean Monica — are unable to stand being around the tyrannical and snobbish squad captain who's known as The Bomb Diggity. Whittier and Monica quit and vow to form their own cheerleading squad made up of college campus misfits and social outcasts for a competition to see which squad will represent the college for the national cheerleader championship and be lead by the new Bomb Diggity! Best known for being a blatant rip-off of the book Sweet Valley High #113: The Pom Pom Wars. This is also notable as the only film of the series to star nobody anyone's actually heard of (with all due respect to Bethany Joy Lenz... and, y'know... Felicia Day...).

Whittier: Don't be all up in my Kool-Aid! 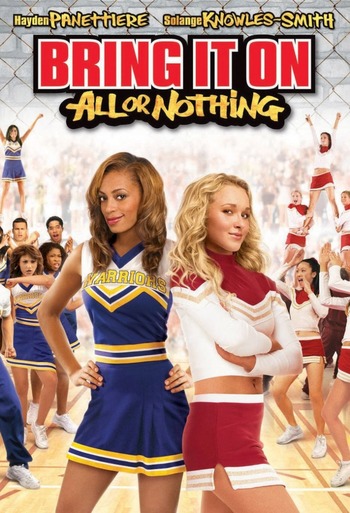 Britney Allen (Hayden Panettiere, playing a cheerleader for the first but not the last time) is living the white cheerleader's dream. At the elite (meaning that there is only one non-white student, and that student knows martial arts because she's Asian) seaside campus of Pacific Vista High School, Britney is captain of the cheerleading squad and the envy of everyone at school — especially one overly-ambitious teammate. When Britney hears about a forthcoming audition for a top cheer squad to appear in Rihanna's upcoming television special, she is determined that her Pirates cheer squad will capture the coveted spot. But Britney's life turns catastrophic when her father's job takes her family to Crenshaw Heights, a darkly ethnic working-class neighborhood east of Los Angeles. At her new school, Britney is viewed with suspicion by most of the dark-skinned students, especially by Camille (Solange Knowles), the overly confident and acerbic black leader of the ethnic Crenshaw Heights Warriors cheerleading squad. No one is more surprised than Camille, however, when "white girl" Britney proves herself and secures a spot on the ethnic Warriors' ethnic cheer squad. The two other non-black students being a heterosexual cheerleader Latino beefcake love interest, as well as a Latina who speaks half of her dialogue in Spanish. Britney and her new teammates work feverishly to prepare the audition for Rihanna, incorporating some edgy new moves into their performance. Now the pressure is on, as the Warriors find themselves locked in a high-stakes cheer-off with Pacific Vista, Britney's old school! During the no-holds-barred fight to the finish, friendships, loyalties and talents are tested — but only one team can come out on top! This installment is renowned for being the most similar to Mean Girls. This entry is also notable for having two former Lizzie Spauldings in the cast (Hayden Panettiere and Marcy Rylan).

Jesse: Dude, I could kick the dude outta you! 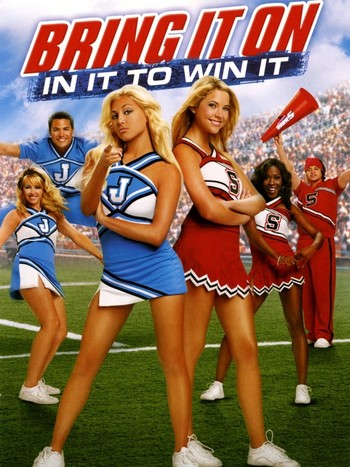 Southern California high school senior Mighty Whitey Carson (Ashley Benson) arrives at the all-important "Cheer Camp Nationals" determined to lead her multi-ethnic squad, the West High Sharks, to victory. But chic New Yorker Mighty Whitey Brooke and her multi-ethnic team, the East High Jets, are equally steadfast in their pursuit of the competition's coveted "Spirit Stick". As tension mounts between the two rival squads, Carson falls for fellow vaguely-non-white, heterosexual cheerleader Penn, not realizing he's a Jet. When Brooke discovers the budding romance, she raises the stakes by challenging Carson to a one-on-one cheer-off. A spectacular, West Side Story-type "cheer fighting" sequence turns uglier than expected and cheerleaders on both sides are wounded and unable to compete! Basically, Romeo and Juliet with cheercrips and cheerbloods! This installment is known for incorporating more portmanteau cheerwords than any of the previous Bring It On movies (and that includes Not Another Teen Movie).

Sarah: This is a cheer-saster!
Ruben: A cheer-tastrophe!
Chelsea: A total cheer-clipse of the sun!
Sarah: Not bad.
Ruben: Good one. 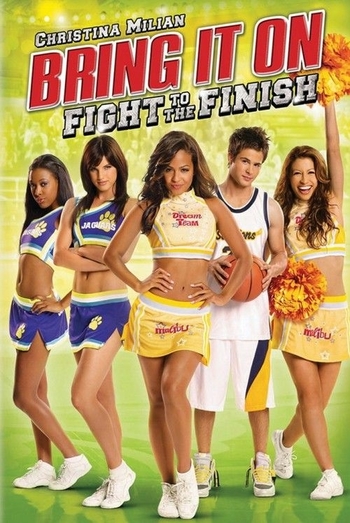 Same-old, same-old, except for once the primary character isn't white. Singer/actress Christina Milian stars as sassy Cuban-American cheer captain Lina Cruz, whose world is turned upside-down when her family moves from the urban streets of East Los Angeles to the sunny suburban beach town of Malibu. At her new school, Latina Lina clashes with bitchy Avery, the ultra-competitive all-star cheer captain. And though Avery may appear Latina due to her deep tan and dark brunette hair, she is in fact racist against Lina, but not as much as Avery's black best friend, Kayla, who can't open her mouth without pooping out racial slurs. Avery takes a special dislikin' to Lina for being a potentially dethroning cheerleader as well as race-mixing with Avery's super-cute brother Evan, who has an affinity for quirky hats. Lina's always been able to rise to the challenge, but can she create an all-star squad, beat Avery at the Spirit Championships and still keep her romance with Evan? This is notable as the only film in the series other than the original to have a soundtrack album released (and the only one to have any instrumental score cues included)... well, that's something.

A Bring It On for the social media generation. Cheer captain Destiny and her champion team the Rebels are called out by a mysterious team called The Truth (a nod to Anonymous) which leads to the team being challenged by other teams all over the world. Vain, egotistical Destiny, who values her online presence and the number of internet followers she has over anything else, can't stand the humiliation brought on by The Truth so she sets out to prove she's still the best. She starts out by recruiting a group of male street dancers that she conveniently meets after her first encounter with The Truth. Destiny's ego and her refusal to infuse anything new to her routines eventually lead to a clash with her best friend Willow. Can Destiny overcome her selfishness to win back her best friend, hook-up with cute male dancer/photographer Blake, and win the respect of cheerleaders all over the world? Vivica A. Fox co-stars as an internet celebrity called Cheer Goddess.

Destiny: Why can't I go back to my perfect cheer-lebrity existence when everything was about me?!