Film / When We Were Kings 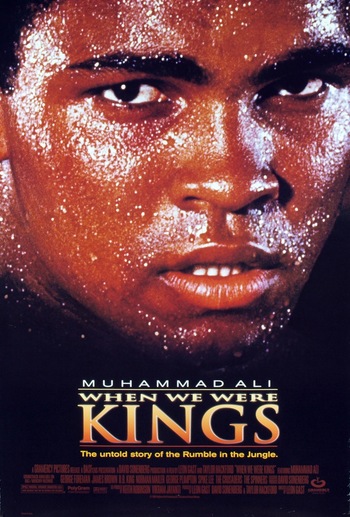 When We Were Kings is a 1996 documentary film directed by Leon Gast.

" fight between Muhammad Ali and George Foreman. Foreman is the reigning heavyweight champion of the world, having won the title with a merciless beatdown of Joe Frazier ("Down goes Frazier! Down goes Frazier!") and retained it with an equally savage destruction of challenger Ken Norton. Muhammad Ali, for his part, is attempting to regain the title he held from 1964 to 1967, before he was stripped of the title due to his refusal to submit to induction in the U.S. Army during The Vietnam War. Foreman is demonstrably bigger and stronger than Ali as well as seven years younger. While Foreman pounded Joe Frazier and Ken Norton each into jelly in the second round, Ali had lost to both Frazier and Norton in recent years.note He'd also beaten each of them, although the scoring in the second Norton fight was controversial. For all of those reasons, Foreman is a prohibitive favorite.

The fight is scheduled in Kinshasa, Zaire. The reason for the exotic locale is that promoter Don King, having promised the fighters five million dollars apiece but not having anywhere near that much capital, goes looking for bidders, and the high bid was made by Zaire's brutal, bloodthirsty dictator, Mobutu Sese Seko. While the location was a matter of cold hard cash, it quickly becomes significant in the black community, both among African-Americans who feel a new connection with Africa, and with natives of Zaire who view civil rights activist Muhammad Ali as a hero.

) that went through 22 years of Development Hell. Originally supposed to be a Concert Film about all the musical acts that went to Africa to stage a concert in coordination with the fight. The original idea was for the concert film to have clips from Ali and Foreman as supplementary material, while the finished film was exactly the opposite. The 22-year delay allowed for the inclusion of interviews with various talking heads, including Spike Lee, who talks about the significance of the fight in the African-American community, as well as Norman Mailer and George Plimpton, who were there in Kinshasa to cover the fight. The Talking Heads segments were filmed by an uncredited Taylor Hackford (uncredited in that he didn't get a directorial credit, that is, although he did get "A Film By" along with Gast).

For a fictionalized account of the Rumble in the Jungle, see the biopic Ali.