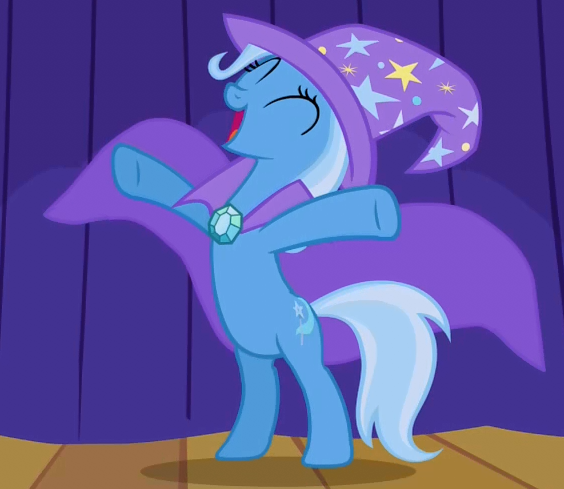 After a bout of magic practice, Twilight is busy modestly shrugging off praise from Spike, who is impressed by the variety of magical spells she can accomplish. Suddenly, they learn from two excitable unicorn colts, Snips and Snails, that "The Great and Powerful" Trixie is in Ponyville to perform her magic show. Twilight and her friends go see the show, but some of the others quickly grow tired of Trixie's boasting that she's the greatest magician in all Equestria and her tall tales about her defeat of a bear-like monster called the Ursa Major, and Rainbow Dash starts heckling her.

Trixie: Well, well, well, it seems we have some neeeigh-sayers in the audience!

Trixie retaliates by challenging Applejack, Rainbow Dash, and Rarity to test her claim that "anything you can do, I can do better!", then proceeds to turn their challenges against them and humiliate them one by one. Despite urging from Spike, Twilight Sparkle refuses to do anything because she's afraid of being mistaken for a show-off herself.

Snips and Snails are impressed by the act, but Spike tries to convince them not to take Trixie's stories at face value:

Spike: Look, unless an Ursa Major comes walking up the street for Trixie to "vanquish", I am not going to believe a word she says, and neither should you!
Snips: Hmmm... an Ursa walkin' up the street, eh? Snails, you thinkin' what I'm thinkin'?
Snails: Why is it they call it a flea market when they don't really sell fleas?

The two unicorn lads sneak into the Everfree Forest with the intent of luring an Ursa Major to Ponyville so they can watch Trixie take one on. This proves to be a bad idea: the giant bear monster goes on a rampage, Trixie nearly panics at the sight of the beast, and when she does try to defeat it, she barely annoys it. With Ponyville at risk, Twilight finally decides to make with the magic and... lulls the Ursa to sleep by rocking it and feeding it with an improvised bottle of milk, made by telekinetically ripping open a water tower, milking a barnful of cattle, and affixing a makeshift nipple to the end. After returning the Ursa from whence it came, her friends ask how she was able to defeat a creature considered to be invincible, where Twilight reveals the titanic Ursa "Major" was only a baby Ursa Minor.

Trixie runs off while Twilight and company deliver the Aesop: taking pride in your abilities and using them when they're needed isn't showing off. Twilight also tasks Snips and Snails with helping out the town, but is generous enough to give them (and Spike) fashionable mustaches as well.