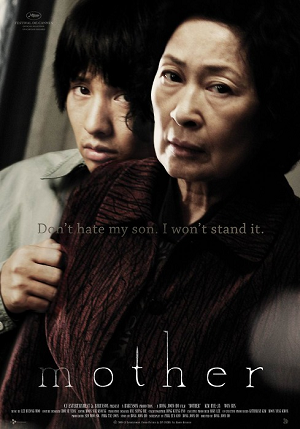 Mother (or Madeo) is a 2009 South Korean film by Bong Joon-ho, starring Kim Hye-ja and Won Bin. Yoon Do-joon, an amnesic young man, is thrown in prison for the murder of a local girl, Moon Ah-jung, after a night of heavy drinking. Mother believes that her son is innocent, and tries her damnedest to get Do-joon Yoon to remember details that will help his case. The help of others is enlisted, too, but not all are reliable — prompting Mother to take things into her own hands, even if danger seems to lie just around the corner.

In no way related to the 1996 film starring Albert Brooks and Debbie Reynolds, or the 2017 film starring Jennifer Lawrence and Javier Bardem, much less the Maxim Gorky novel and 1926 Soviet film adapted from it.