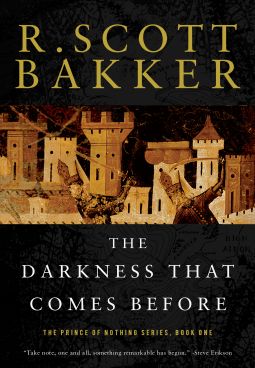 "The surviving heathens were strung from trees, and in the evening light they hanged, like drowned men floating up from the deeps. And though years passed, none dared touch them. They sagged from the nails that fixed them, collapsed into heaps at the trunks. And to anyone who listened, the bones would whisper a revelation... the secret of battle. Indomitable conviction. Unconquerable belief."
Advertisement:

The Second Apocalypse is a dark and philosophical fantasy sequence by R. Scott Bakker that is planned to eventually consist of three series of books.

The first series, The Prince of Nothing, is set during a Holy War in a medieval world where Functional Magic exists and an obscure Ancient Conspiracy, Shrouded in Myth, is plotting The End of the World as We Know It. The characters who are embroiled in this conflict include a tired Badass Bookworm sorcerer, a cunning prostitute, and a mentally unstable barbarian chieftain.

But in the midst of the Holy War arrives a wandering monk, Anasûrimbor Kellhus. He is the scion of an isolated sect who have spent millennia making themselves into beings of pure logic. Leaving his sect for the first time to answer his wayward father's mysterious summons, Kellhus is completely ignorant about the outside world. At the same time, his astounding mental and physical abilities, untainted by emotion or morality, are like nothing the world has ever seen. Will Kellhus find his father, and what will he impact along the way?

Advertisement:
The Second Apocalypse consists of:Short stories set in the same universe:See also Neuropath and Disciple of the Dog, two thrillers by the same author containing many of the same themes.
Advertisement:

Alternative Title(s): The Second Apocalypse, The Prince Of Nothing